Camden Works, a program meant to connect city residents with jobs that was first announced more than a year ago and originally slated to be up and running by the beginning of 2019, is now a reality.

A new website went live Monday, said Cooper’s Ferry CEO Kris Kolluri, and Camden Works will have financial partners in the private and nonprofit sectors, a management team, and partnerships in place with established nonprofits in the city to offer a streamlined process to match Camden residents with jobs, support services and training.

The Courier Post reviewed an advance copy of “Camden Works: Re-imagining Workforce Development in Camden,” a blueprint for the program announced by Mayor Frank Moran at a September 2018 employment forum organized in the wake of controversial comments by Holtec CEO Kris Singh.

Norcross and Story will act as the financial board’s co-chairs.

“The financial partners are guaranteeing four years of financing,” Norcross told the Courier Post. “Different partners will contribute at different levels,” with corporations like EMR, Conner Strong, NFI, Michaels and American Water taking the lead in contributions. Camden Works’ budget will be $500,000 per year, Kolluri and Norcross both said.

What will set Camden Works apart from existing employment programs, Norcross said, is “managing partners that are very diverse, very Camden-based and orientated, and they are all very committed to training and providing opportunities to Camden’s citizens.”

Each is a well-established nonprofit or agency with deep roots, existing programs and infrastructure and years of experience helping Camden residents, Norcross added.

“I think in the past, I think to the extent that there had been (job placement) programs, they’ve missed the diversity necessary,” he said. “They also likely were not funded properly.”

“To ensure Camden continues its path to progress, it is vital that we develop a comprehensive training and employment placement program,” the report states.

“While the current efforts to train and place people are well-intentioned, a clear and present opportunity exists to integrate a fragmented system into a more effective one,” it continues.

Camden Works will “support the employment opportunities at hand by streamlining the connection between employers and residents seeking jobs. By convening employers and helping residents overcome common barriers to employment, we will continue to build pathways for residents to participate in the City’s economic growth.”

Who’s helped, and how

Four types of potential workers will be the focus of Camden Works’ efforts: high school graduates who are ready for training and employment; previously incarcerated people or those returning from incarceration; recent local college graduates; and homemakers or displaced workers seeking a return to the workforce.

A physical office for Camden Works will open in early 2020, he added.

“There is a very specific reason we’re working with the partners we are,” Kolluri said. “Center for Family Services has the capacity and scale of the issues (facing job candidates) and understands the demand for employment. Hopeworks and Dan (Rhoton) have the tech infrastructure and knowledge. The NAACP can help those who need a second chance.”

“Employment is critical to helping people achieve self-sufficiency,” said Merilee Rotolo, chief operating officer for Center for Family Services. “We have the boots on the ground and our staff is already out there to let people know Camden Works will be an access point for jobs.”

CFFS will offer case management services, and its outreach workers already use a trauma-informed approach, she noted.

“We’re focused on removing barriers for people who have not been successful” at maintaining employment in the past, she added.

As an example, homemakers and others who are returning to the workforce after a long absence would be ideal Census workers, Kolluri noted, who can work part-time and on a temporary basis as the 2020 count begins. Camden Works can help connect them to jobs with the Census Bureau.

Camden presently lacks a centralized employee recruiting and placement portal, the report noted, and companies in Camden — many of which have received tax incentives to relocate or expand in the city — use a patchwork approach to recruitment. Nonprofits that train residents for jobs often don’t have any assurance their trainees will obtain meaningful employment, it continues, and there are few ways for residents to hear about and apply for jobs, leading to frustration, it continues.

Its approach will be as follows:

“We’re up to something good here with this partnership,” said Moran.

“Camden has all the components necessary to build a thriving economy – it’s just a matter of connecting them in a synergistic way,” said Richard Smith, president of the  New Jersey NAACP.

“The stable and focused strength of our managing partners, the financial support of our business and philanthropic leaders and the guidance of advisory partners will boost residents living wage employment opportunities,” said Raymond L. Lamboy, president and CEO of LAEDA.

Asked about the gap between its initially intended start and its actual launch, Moran noted that “it’s not something we can run from City Hall, and I made a commitment from the beginning that we would not tax city residents to pay for this.”

City officials looked at similar initiatives in Philadelphia and Newark and “realized it was a bigger undertaking, so we are supportive of this partnership of nonprofits that have a lot of credibility and history in the city,” Moran added. 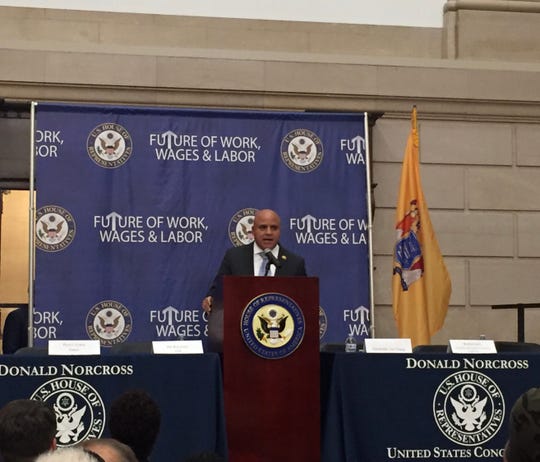 Camden Mayor Frank Moran speaks at a forum on jobs and opportunities for city residents. Moran announced a new initiative to help match Camden residents with jobs in the city. (Photo: Phaedra Trethan)

“I wanted so much to make this happen on Day One, but we had to think this out and make sure when we rolled it out it was effective and reputable, and that all the partners bring something to the table.”

Moran also defended the controversial tax incentives that have lured companies like Holtec, Subaru of America, American Water and others to the city, but have also drawn criticism and scrutiny.

“The incentives that were offered by the (2013 Economic Opportunity Act) will generate tax revenues 10 to 20 years from now, and whoever is mayor then will be grateful to decision makers now who created a real tax base in Camden,” he said.

“We have many people in Camden who are trained and educated, but we want to be able to say someday to anyone, ‘If you live in Camden and you want a job, you will have a job.'”

Camden Works is online at www.camdenworks.org

Half of Philadelphia households struggle to make ends meet: The ALICE Report